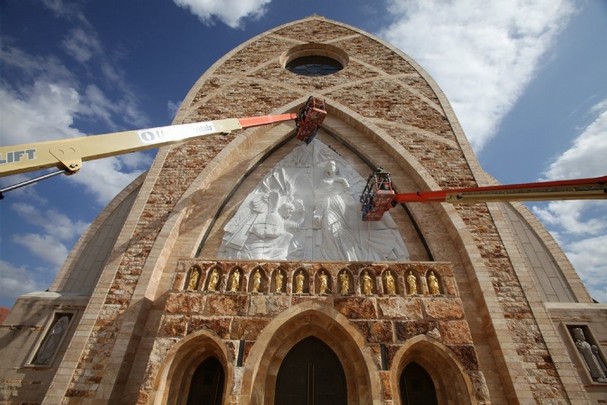 AVE MARIA — There’s a virtual stone road from Ave Maria to the Vatican, and its first mile marker rises on the facade of the tiny town’s oratory.

There, the likeness of Mary, the mother of Jesus Christ in Christian theology, is depicted in a 31-foot tall, high-relief Carrara marble sculpture. The blend of realistic figures and stylized radiance re-creates the moment an angel is said to have appeared to Mary to tell her she would bear the son of God.

It is the alpha to the omega of the “Pieta,” the famous Michel­angelo work in its own chapel; that one shows the same Mary, mourning the death of Jesus, her — and God’s — son.

While the “Pieta” faces crowds of tourists and pilgrims daily, “The Annunciation” currently gets its viewers by the scant carloads. Many of them are curious visitors who want to see Ave Maria, the town developed around a conservative — or orthodox, depending on your perspective — Catholic university.

“The Annunciation” has fueled visions much bigger than its square footage. Márton Váró, its sculptor, believed so strongly in the project he built his maquette, the scale model, in Carrara marble for the competition nearly five years ago. Váró is not new to Southwest Florida; the Transylvania-born sculptor created the figure of Serenity in the Garden of Hope and Courage at the NCH mother campus on Third Street South.

Nor is he new to large commissions. Váró has created public works of art all over Europe, in both contemporary and realist styles. He also sculpted the two 48-foot, trumpet-blowing angels on the facade of Bass Performance Hall in Fort Worth, Texas. That may have been his largest commission. This is obviously his most important.

“I’m already fixing in it my dreams at night, how I’ll do my next day’s work,” he says. At 67, the trim Váró works with the stamina of a teenager: Borne up on a lift truck each morning after early morning Mass in the oratory, he sands, he chips and he chisels until noon. Then it’s time to come down so that worshippers at the noontime service aren’t listening to drills and sanders.

“I got really nice permission to work through the 5 p.m. Mass,” he says, beaming impishly. At sundown he comes back to earth, after days that are “about a total of 10 hours in that basket,” he guesses.

On Sunday, he works in a makeshift studio Ave Maria University has lent him, creating his own abstract sculpture. In just 12 days, his work on the oratory is to be dedicated, appropriately on the Roman Catholic feast of the Annunciation. After that, Váró will be working on some other project, somewhere else, until more funding allows him to create two side wall angel sculptures.

“I’m like the migrating bird,” he says. This bird, however, may be subject to post-partum depression. Váró talks about his time in the basket with pure joy: “I’m so happy when I’m working with stone,” he says. “It’s what I was meant to do.”

Váró would not have been sanding and chiseling at this fevered pace were it not for the Naples gallery owner who represents his work, Michael Windfeldt. Wind-feldt, who owns Gallerie du Soleil at 393 Broad Ave. S., thought that Váró, with his large-scale experience and his artistic skill with figures, should enter.

Unlike sculptors who work with assistants, Váró prefers to do his own sculpting, excepti for the large-scale chiseling around the figures that he has planned. It was one more credential that brought an oratory committee to choose Váró’s entry over others from as far away as Russia, with dreams from bronzes to a gold-leaf mosaic.

“We were the only ones who actually had an idea of how to do a project like this,” recalls Windfeldt.

Even Windfeldt wasn’t prepared for what came next, however.

“Tom (founder Tom Monaghan) was telling me, “We really want to do this, but we have a responsibility, and we can’t really take money away from classrooms and buildings right now.”

So Windfeldt, with Váró’s help, came up with his own proposal: Create a foundation that could, first, raise the money to pay for the sculptures. That could be done by creating smaller bronze ones for donor appreciation presentations, he says.

“When you’re out raising the money you’re up against all the charities in the world. We needed to do something unique. So why don’t we use art to raise money for the arts? People will have this symbol of the sculpture as a reminder of the important work they’ve helped to create:” But by now Windfeldt had become intrigued at the prospect of working groundup with the art programs of this new university and its town.

“It was a blank canvas,” he marvels. “It really had a potential to be something for Southwest Florida that modeled a new high level of everything it was doing.

“The public art at Ave Maria, instead of following the same model every other church is dong these days — setting a ridiculously low budget for arts or buying them from a catalog — would return to the philosophy of old … that beauty is a manifestation of the divine … that you recruit the best artists in the world at your time to create your artwork, whether it be at St. Peter’s Basilica or in your own church or wherever.

“The best artists of time left this legacy — and centuries later, people are still coming to see those works at the Vatican and other churches in Europe.”

Windfeldt credits his inspiration to a public letter by Pope John Paul II to artists in 1999 (a weblink to it is in the accompanying box): “He is making a call to artists and to society to return to supporting them — to return to the philosophy that beauty is a manifestation of the divine.”

Váró offers his own philosophy of art in a similar way: “It’s from St. Augustine — that beauty reflects the goodness of God’s creation.”

“ You don’t have to be Catholic or even Christian to want to support art,” Windfeldt explains. “We felt there was a much broader base of people who would want to give to the arts in Ave Maria who might not otherwise be involved.

“I have a Jewish lady from West Palm Beach who just loves what’s going on and wants to be part of it.”

The apostles have been giving Váró fits. The smaller sculptures are set into niches across the front narthex roofline, and they pick up marble dust in a heartbeat. They were also expensive work-arounds when Váró and a crew were trying to affix the 3-feet-thick marble segments of the sculpture to the wall of the oratory.

The match tolerance was in millimeters, the weight in scores of tons. The final weight of the sculpture sitting on that reinforced concrete foundation is 54 tons. One broken segment could set the completion back a year. The process was an allday session of nerves, sweat and bated breath.

In the meantime, Wind-feldt, who is now executive director of the new Ave Maria Foundation for the Arts, is in California, supervising the first bronzes of “The Annunciation.” Windfeldt’s father, who had been following his son’s growing involvement, offered family underwriting of the installation so it could begin without waiting for the bronzes, which are a project in themselves.

Váró is at work every day to finish the sculpture — shape the delicate fingers on a remaining hand, detail the feathery folds of a wing, chisel out the veil into the soft folds that dominate the the angel and the madonna. Above them, shooting down in milky slabs is the divine message, straightforward, even without words: Hail, full of grace.

The Rev. Robert Tatman, pastor of the quasi-parish at the Ave Maria Oratory has watched the whole process for the past two years. It’s wonderful to see it come to completion,” he observes. “I’m inspired by what it brings to what that building means.

“Having her being the very first image people see, and walking under it to enter the oratory — it’s just wonderful to know that beauty draws into the beauty of this place.”

Váró marvels at this commission: “There has not been one comment that ‘I would do it this way’ or ‘It is strongly advised. My worry every day instead is that what I’m doing is good enough. I want it to be worth all the trust they have in me.”

It’s so much more than “good enough,” says Windfeldt.

But its art, he says, is what will make it a work for the ages.

“Those people who came out to watch Marton chiseling and sanding the last pieces, they can say in five or 10 years they saw history in the making.”