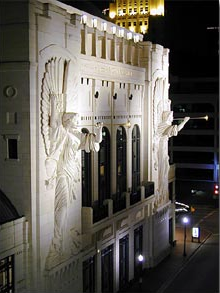 Bass Performance Hall was built in 1998 and occupies an entire city block on 4th and Calhoun streets in Fort Worth’s Sundance Square. Serving as the official home of the Fort Worth Symphony Orchestra, Texas Ballet Theater, Fort Worth Opera, and Cliburn Concerts, the hall brings classic European architecture to the heart of Cowtown and is equally impressive as an opera house or rock arena.

A pair of enormous, trumpeting angels, standing 48 feet tall and sculpted into Texas limestone by Marton Varo, adorn the outside of the building. Inside the 2,056-seat hall, look up to see the massive, domed ceiling painted to look like the sky. It’s not only aesthetically pleasing, but it also plays a vital role in the excellent acoustics of this multipurpose facility.